Book Confession: Never Have I Ever – Divine Comedy

So this book, or rather epic poem, has been on my “to read” list since high school. I was 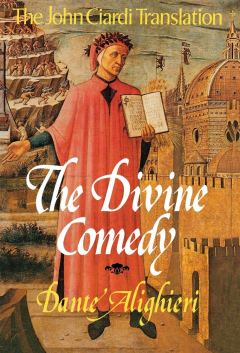 looking forward to reading it in class because even though school sometimes could be a pain, my understanding of the literature was better in class than if I were to read it alone. So fast forward to my sophomore year in highschool when our professor says, “Guess what epic poem we are going to read?”. In my head I screamed THE DIVINE CO- “Paradise Lost!” was her answer.

I didn’t know much about Milton or Paradise Lost, so my burning anger at not reading this The Divine Comedy was appeased basically because my teacher was waving a new shiny toy in front of me. And I enjoyed this new toy so much I read it twice. But I haven’t gotten back to The Divine Comedy. I believe only 2 or 3 years ago I purchased a paperback version from the bargain table at my local Barnes & Noble in hopes that seeing the 4-inch thick spine on my shelf would prompt me to read it. It has not.

The simple fact is I know it’s a long book. It will have references and allusions and sources that I may (read: will) have to parse through. Now I am a person who enjoys that type of reading, but it takes time and patience. And I have yet to seem to find the time to gather enough patience to sit through it. I think I used it all up during my Dostoevsky phase.

I know a bit more about The Divine Comedy than other classics I have never read. Half of it is because there were books that I read and courses that I took that allude to it and I  had to look something up here or there. The other half is because I took a Sporcle Quiz that had me rank the sins according to Dante and I cheated and googled it instead of guessing.

But I am fuzzy on the specifics of the story. Like the plot. I get the allegory, just not how it is conveyed. If you were to ask me, I think it goes something like this:

The protagonist, a wanderer named Dante, witnessed a mugging in the street of a town he had stumbled upon, and was awed by how little the people cared. He asked the town’s blacksmith, who was so used to robberies that he didn’t even miss a beat while pounding on hot iron, why no one cared. The blacksmith said “Aye thas jus a wee level 2 an 3 o’ Hell. Nothin’ werth batherin’ yerself ova”.

Fascinated by this town and how crime is almost accepted, Dante stayed and fell in love with a woman. A married woman (because in literature a woman is the easy scapegoat for why men do what they do). Now longing (lust) after this woman he takes to drinking (gluttony) because he can’t have her even though he wants (greed) her. He spends his days crying in a drunken haze (sloth), before he finally works up his anger (wrath) to go and confront the husband. Dante tells the husband that he deserves the wife (greed and envy – double whammy) and that he is a better man than the husband will ever be (pride).

Drunken Dante swings at the husband, misses, and falls on a table, killing him instantly. What follows is a Mephistopheles character greeting Dante on the lowest level of Hell, and telling him what he can do to at least make it to the highest since he is now dead. It all basically concludes with Dante meeting people who did much worse things than he, so when he makes it to the Lust Level his pride yanks him straight back down to the Pride Level where he will spend all eternity. Mephi laughs. The end.

Like I said before, this will definitely be a near future read for me. I typically read a classic novel then contemporary and repeat the pattern. I’m almost done with a Brandon Sanderson novel, so maybe this is the impetus I need to finally crack open one of the greatest works of all time.

Alicia (uh-lee-see-uh) is an actress, singer, writer, and producer. I will also laugh at any pun. END_OF_DOCUMENT_TOKEN_TO_BE_REPLACED
This entry was posted on Monday, April 1st, 2019 at 8:00 am and tagged with Blog, books, Dante Alighieri, Humor, Literature, Never Have I Ever, Opinion, personal, Poetry, Rants, The Divine Comedy and posted in Literature, Opinions, Rants and Raves. You can follow any responses to this entry through the RSS 2.0 feed.
« Why Books are Great (and other reasons why they are useful)
Authors Of April – Maya Angelou (April 4) »

One response to “Book Confession: Never Have I Ever – Divine Comedy”

The best of the literary web

There's always room for one more...

Escape is possible, survival is another story...

a blog about the worlds, conventions, and curiosities of fantasy fiction

Belle of the Library

A YA Blog for Any Age of Reader

Everything about Books and Reading